The strongest starting hand in poker, pocket aces are a strong pre-flop favourite over any other two cards and a 4:1 favourite over almost any hand. You will be dealt 'pocket rockets', as they are. In Texas Holdem, it is important to have good starting hand selection. This is important as it prevents you from entering pots with sub-standard hands, which could eventually lead to you losing a lot of money in the process. 'Starting hand selection' is simply choosing the good hands over the bad, and thus folding the bad hands when you get them. Pocket tens is essentially the best hand out of a lower-tiered group of starting hands. It’s still a very good hand against rags but it’s crushed by the aforementioned AA, KK.

The two cards that you are dealt at the start of a hand in Texas Hold'em are your weapons. If you want to play a hand, your cards need to be strong enough to fight against your opponents' cards to win the pot.

At the core of every winning poker player is good starting hand strategy.

I'm not going to mess about here, I'm just going to give you the starting hand strategy table for you to get your teeth into. The tables below give starting hand recommendations for both full ring and short handed games depending on your position at the table.

How to use the starting hand strategy table.

First thing that you need to do is consider your position in the hand, because this is going to determine the range of cards that you are going to be able to play profitably.

So essentially, the better your position is at the table, the more hands you can play.

However, if you are in one of the later positions and there has been a raise before you, then you should forget about playing the hands in green, and stick with the ones in red and blue. This is because players raising from early position will typically have a strong hand, so you should also have a premium hand to play against them. Playing the green hands against a raiser from early position will usually put you in pretty bad shape.

When you are playing at a full ring table that holds around 10 players, you really need to tighten up your starting hand selection. This is because the large number of players at the table increases the likelihood that at least one player has a premium hand, and so you want to be sure that you have one of the best hands at the table every time you see a flop.

The starting hand table may look to be very strict, but this is simply a rough guide to help beginner players find their feet in Texas Hold'em. After you start to learn the game and become more experienced, you can start to open up your starting hand selection to incorporate different hands in different situations. However, if you are a new player, it is advised that you stick with this table as it will give you the best shot at winning as you start out.

Seeing as there are less players at the table, you can afford to open up your starting hand requirements quite a bit. If you stuck with the full-ring starting hand table, you would be playing too few hands and missing out on good opportunities to make money. 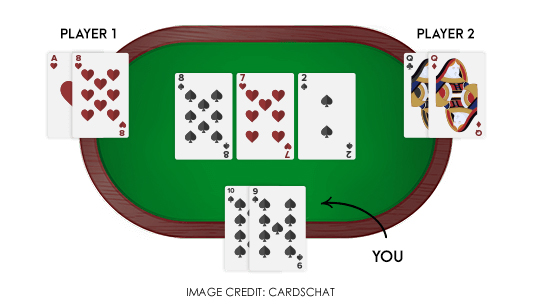 Short handed tables are going to be harder to play than the full ring tables because the action is generally going to be wilder and less predictable. You are almost forced to play more hands, which means that unless you know what you are doing, the chances are that you are going to lose more money than you would at a full ring game.

Again, just as with the full ring table, the short handed table is merely the basic guide for a beginner player. As you progress, you will be able to work out how to profitably include other starting hands into the line up. But as for now, stick with this table if you're just getting to grips with short-handed play.

If you are a new player, these tables are really going to help set you up in the right direction. Even though this has only been a pretty rough guide on which hands to play in each position, it should have helped to build a solid foundation for you to build upon.

A lot of the time, there are going to be other factors like the type of players who you are up against, and/or the action that has taken place before you that will have an influence on your decision to play a hand. It's always best to use your head in poker, rather than relying on a table or rule for every play you make. So whilst this table will be a handy guide for now, try not to rely on it too much, and start to develop your knowledge of good starting hand strategy as you play.

At the end of the day, poker isn't really poker if you are playing from a set of rules. Always try and use your head when making decisions - they will be more profitable that way.

Go back to the sublime Texas Hold'em guide.

Can You Afford Not To Use
Poker Tracker 4?

“I wouldn’t play another session of online poker without it”